When I was 13 years old, my foster mother had taken it upon herself to find things to keep me out of mischief. One day she had approached me and asked if I would be interested in learning how to knit. Well I really did not want to learn; I figured that I should humor her and give it a whirl. I agreed with so much enthusiasm on my face. Ok so not really. She told me that she had already asked her friend to come over and that she was on her way! Her friend taught me the under-the-arm method. It was ok but I just could not get into it. Too much fiddling, letting go, and stitches running off my needles 🙁 I made a scarf or two and forgot about it.

Well 20 years later I wanted to work on broomstick lace. I did not really want to use a broomstick (since my broomstick has the plastic top at the end and I could not get it off). I looked around and found a turkey baster and it worked out well. (Pictures of this will be on another post.) The problem with the baster was that it was not long enough to make an afghan or a shawl. I decided to buy some large knitting needles. A size US 19 or 20 needles are the ones that are used for broomstick lace, but I did not want my stiches to be large this time. I ended up purchasing  size US 15 needles. They were perfect for my items 😀

I had seen pictures of both knit and crochet entrelac. I just fell in love on how the knitted entrelac makes the garment look “woven”!! I still made a swatch of crochet entrelac but I did not like it too much. I knew that I would have to go back to basics in knitting. I had some left over yarn and picked up the needles. I taught myself how to knit right handed (since my left wrist was screaming at me). I used two yarns at a time in order to make it bulky and this is what I ended up making. 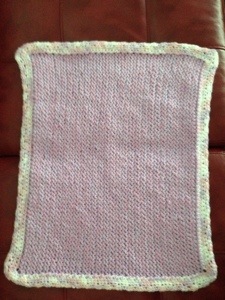 Since I was not sure on how to knit a border I decided to make three rows of single crochet. My 8 year old loved it and uses it for her doll 😉

Now on to knitted entrelac!! I’ll post about my adventure soon ;P